Hosterman showed feel for his secondary stuff along with command of an 87-89 mph fastball in his outing at the 2015 Under Armour All-America Game. Quick and uneventful innings have become the norm for him, as he offers very few good looks and surrenders even fewer good swings from opposing hitters. 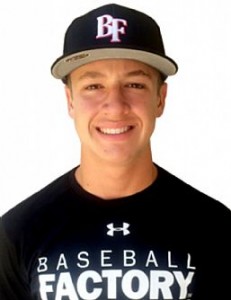 PREVIOUS SCOUTING REPORTS:
When we saw Hosterman in September 2014 at the UA Futures East Showcase, he was just starting to throw off a mound again after shutting it down following his summer schedule. We saw glimpses then of what we’d see in full force by early summer 2015.

Hosterman has good proportion at 6-foot-2 and 195 pounds. He topped at 85 with his fastball after a light early fall, he’s got more in the tank. He hid the ball well, and got good downward angle on his stuff – making it pop on hitters above what the radar gun said. His arm worked well from the glove and out front, and he got his chest rotated to the target well. Breaking ball was a low 70s pitch with 1-7 shape. It was inconsistent in terms of snap and strikes, his best had depth and were around the plate. He showed a couple of change-ups with diving sink, but not enough to get a great look at the pitch – it appears to have quite a bit of promise, and gives him a legitimate three pitch mix when he is in prime form. Overall, a physically projectable left hander with arm strength and the makings of a quality breaking ball, along with flashes of a developing change-up.