In Chicago at the 2015 Under Armour All-America Game, Carlson once again showed the ability to deliver the barrel for hard contact against quality pitching, with a line out and a single in three trips to the plate. His defensive ability once again stood out at 1B, as did his defensive versatility. 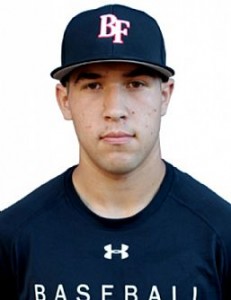 PREVIOUS SCOUTING REPORTS:
We first saw Carlson in Fall 2014 at the Under Armour Futures West Showcase:

Dylan is a strong, physical 1B who swings the bat with authority from both sides of the plate. Like most switch-hitters, his set-up and swing are similar from both sides. He has a toe tap trigger, good rhythm to his approach and generates bat speed with some loft pull power each way. He can catch up to velocity and reacts well to off-speed stuff as well. As a defender, Dylan shows his athleticism and sure hands. He is quick-twitched with a good first step and is comfortable around the bag. He also shows a quick release and accurate arm from different angles. While the physical tools are there, what may stand out most in Dylan are his intangibles. He exudes a passion for the game, and has a high baseball IQ. Once the game started he was quick to study pitchers and share information with teammates after his ABs and ask for info after their at bats. Overall, Dylan has an extremely bright future and will be an asset to any team he plays for in the future.

We saw him next in July 2015 at the Under Armour National West Showcase, where he showed advanced defensive ability at first base, along with the athleticism and versatility to play either corner OF position. He swung the bat well from both sides of the bat in BP, and proceeded to make hard contact in four consecutive trips to the plate — resulting in a 3-for-4 day with hits from both sides of the plate.