Benson put on a show in the HR derby qualification round at the 2015 Under Armour All America Game. He launched 11 home runs (including at least one on top of the building beyond the RF fence at UIC) to lead all players in round one on Thursday evening, and then recorded 6 home runs in the second round on Saturday at Wrigley Field. 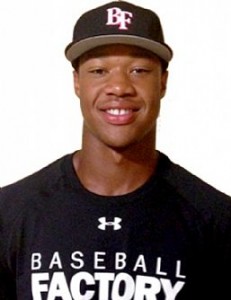 PREVIOUS SCOUTING REPORTS:
We saw Benson on a cold, raw day in early November at the Futures South showcase. Our report from that day appears below:

Benson stands an impressive 6-foot-4 and 220 pounds, comparable to a young Jason Heyward (then Atlanta Braves OF, now with St. Louis Cardinals). There is some stiffness to his left handed stroke but he is very strong thru contact and the ball reacts very well off his bat. Raw power is ahead of hitting ability now, but he has an idea with route to contact, and stands to develop further as a hitter. Versatile defender, appears to be capable in both OF and and 1B. Actions are much more natural at 1B. 91 mph raw velocity. Overpowers ball on release – flight and arrival aren’t the same as exit from hand. Potential for big arm with looser and more controlled stroke. Overall, an exciting combination of body and tools.