These 2 HRs off the bat of @willtaylor_10 in last night's playoff game helped to propel @ForkBaseball to the win! The @BaseballFactory All-American's stock continues to rise this spring! pic.twitter.com/SUvkv8hASV

In Their Own Words: A Conversation with Under Armour All-American Joey Wentz 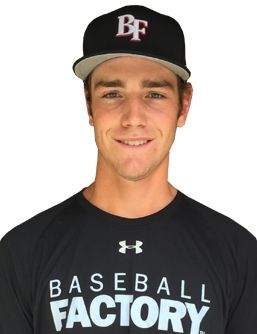 Joey Wentz has been nearly perfect this season on the mound for Shawnee Mission East High School in Leawood, KS. The big, hard-throwing left-hander stands 6’5″ and 210 pounds and is firing the ball in the mid-90s.

With 74 strikeouts, he did something that collegiate players and even major leaguers have not done often or at all; he didn’t allow a single base hit in his first 23 innings this season (he’s allowed only two hits all year) and hasn’t allowed a run in 36 innings.

Wentz, who was a 2015 Under Armour All-American, sits at No. 38 on our Top 100 High School Baseball Prospects List and is a University of Virginia commit. We saw him absolutely crush baseballs at Wrigley Field last August during All-America week, so he is a legitimate prospect on the radar. He is in rarified air, one of the true two-way prospects in the entire class with a big-time left-handed stroke and clean, loose-arm action on the mound that can easily touch the mid 90s.

Baseball Factory recently caught up with Wentz after a team practice to discuss his future at Virginia and his friendship with fellow All-American and LSU commit, Riley Pint.

Baseball Factory: You went 26 straight innings to open up the season without allowing a hit. You haven’t allowed a run in 36 innings.. There’s not too many players, even major leaguers that can say that… that has to be a cool feeling?

Joey Wentz: It’s definitely something cool. But most importantly, we’re winning as as team. I want to go out there and continue to do my job and if I can keep us in the game when I start, then I am happy with it.

BF: What do you like doing better – hitting or pitching?

BF: We’ve seen a big time uptick in your fastball. What did you do to get the velocity jump?

JW: I worked out at Premier Baseball in Kansas City with Bob Zimmermann who has a great velocity program, to work on all aspects of my game. The main focus was to add velocity, and it’s worked so far. I did a lot of plyometrics and used balls and resistance bands to get stronger.

BF: You’ve committed to the University of Virginia… if you go there, will they let you do both? Would you be willing to give up hitting and just pitch?

JW: I am committed to do both at Virginia. When I went on my official visit, Adam Hasely and Pavin Smith (Baseball Factory alum) were with me the entire time. I stayed with them. They are great players, great guys and teammates. They’ll both be juniors and they have already won a College World Series National Championship last year as freshman, so it’ll be fun to play with.

BF: How does a Midwest guy end up picking Virginia?

JW: My visit in September of my junior year of high school was when I knew. I believe I am the first person from the state of Kansas to sign there. Virginia’s track record intrigued me. It’s a winning culture with a lot of success recently but also in the past.

BF: You showed well in the Home Run Derby during last year’s Under Armour All-America Game – what was that like participating in that event and go on to be facing Bo Bichette in the Finals of the Derby?

JW: It was pretty sweet to be in the Finals with him. The most memorable thing all summer was that weekend in Chicago. Being there with 39 other great and highly recognized players and to hit at Wrigley Field, at such a storied place, was the biggest thing for me.

BF: Describe your overall experience from the Under Armour All-America Game at Wrigley last year?

JW: I thought it couldn’t have gone better. It’s one of the premier places to play in baseball… Right now, the Cubs and White Sox are big in Chicago. And to play in front of my family was cool.

BF: It’s shaping up to be a big year for Kansas pitchers, both yourself and LSU commit, Riley Pint are being talked about big time – how close are you guys?

JW: Riley and I are really close, good friends. We have been friends since the second grade…We actually worked out together this off-season. He’s obviously a really special player and arm, so it could be a cool thing for Kansas City baseball.

BF: Do you play any other sports in your spare time?

JW: My sophomore season, I averaged 14 points. I played basketball until the middle of my junior year. Now I’ve focused completely on just baseball. But overall, it was a cool experience.

BF: How about a favorite baseball team?

JW: I’d have to say the Kansas City Royals.

BF: What if they drafted you..?

JW: …To play in your hometown would be special.

BF: What player do you model your game after?

JW: As a pitcher Cole Hamels – watching him throw as a pitcher is hard to mimic, but I watch for how he carries himself on the mound and his competitiveness. For hitters, I would say Bryce Harper.. he might be my favorite player. He’s really exciting to watch and really competitive and always wants to win.