The last three MVPs in the National League are Freddie Freeman, Cody Bellinger and Christian Yelich. What do they have in common? They are all left-handed hitters who were drafted out of high school. Every team is going into Sunday’s draft hoping to find an MVP, an All-Star or two, and guys that can help their team win a World Series. They take tools, metrics, performance and lots of other factors into account. I understand the importance of all of all of those things, and we all want 5-tool players, but when it comes right down to it…guys who can hit make the biggest impact.

I’m sure there were a wide range of 60 times from 2021 All-Stars Joey Gallo, Matt Olson, Michael Brantley and Jesse Winker back in high school, but one thing that is consistent among them is that they impact games with their bat. Several left-handed hitters with high hit tool grades, like Marcelo Mayer, Kahlil Watson and Colson Montgomery are being talked about as 1st round selections this year (for good reason), and we think more are probably ascending draft boards in last minute Scouting Department meetings as we speak. The reason – a team is betting on them being an impact left-handed hitter.

Here are a few: 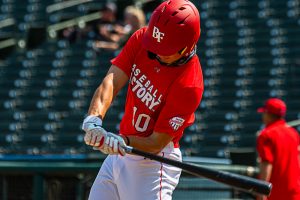 Wes Kath – One of the prettiest swings in the draft with excellent barrel accuracy and continually emerging power make Wes one of the best hitting prospects in the class. Any scout who saw him at the Baseball Factory All-Star Classic left knowing he was one of the best hitters in this year’s crop.

James Wood – He has size and athleticism to go with a summer stretch of outstanding performance, but what really stands out is easy LH power. His short swing despite long levers, strike zone discipline and ability to hit the ball out to all fields make him very appealing.
Peyton Stovall – There may not be a more natural hitter in this draft than Peyton. 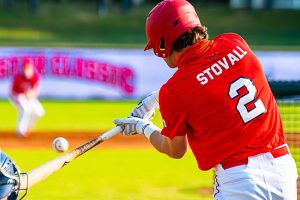 The rhythm and stroke are outstanding. He can adjust to pitches as well as anyone in the class, and he has more present power than he gets credit for. He puts up numbers everywhere he plays for one reason – he is a legitimate bat.

Cooper Kinney – Another prospect, like Stovall, who just always hits. He has natural movements and flow to his swing that produce against high-level pitching. He uses the entire field well and is unfazed by velocity. 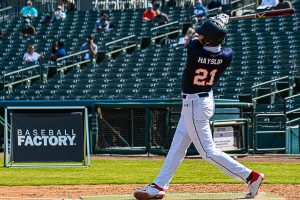 Camden Hayslip – Leverage and bat speed lead to LH power from Camden. He showed this spring that he can drive the ball out of the park to all fields, and he competes in the box every at bat. This former high-level WR recruit has a bit of a throwback hitting style, working to beat the pitcher in each at bat.

Roc Riggio – Roc has hit for as long as anyone following youth baseball can remember. He has supreme confidence in the batter’s box and appears to see and react to pitches as well as anyone in the 2021 class. His at bats always seem to end in either a walk or hard contact.

There are even more, like Jacob Cozart, Gavin Conticello and Caiden Huber who can really swing it, but may end up proving that further in college first for a variety of reasons. Either way, this demographic of left-handed bats that can truly hit is the one that seems to ultimately make noise at the Major League level. It will be interesting to see where all of these prospects end up over the next few days.