In Their Own Words: One-On-One With 2017 Prospect Ryan Vilade 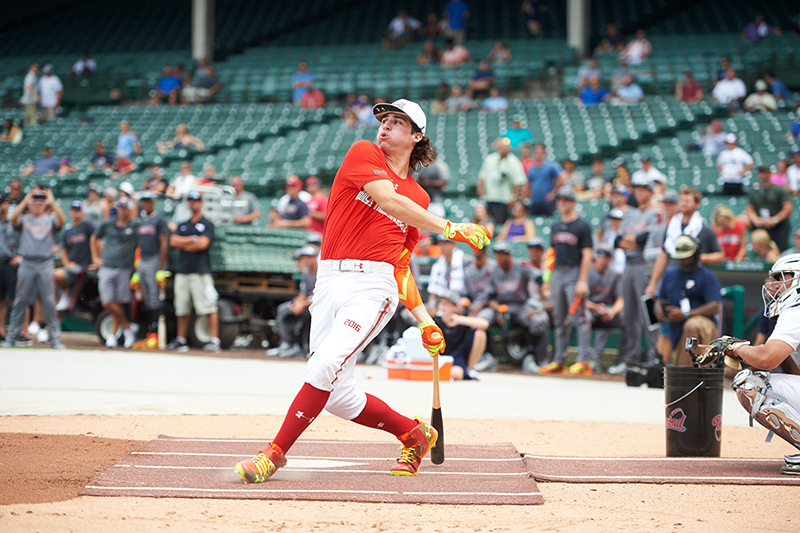 Ryan Vilade has learned a great deal about the game of baseball under the watchful eye of his father, James Vilade who has nearly two decades of coaching experience, as both a head coach at the University of Dallas and UT-Tyler and also as a minor league hitting instructor in the Texas Rangers organization with the Frisco RoughRiders.

That has led Vilade to show a confident and mature approach to his hitting that was demonstrated at high-level Baseball Factory events, namely the way he swung the bat during batting practice sessions and in winning the HR Derby championship before last year’s All-America Game at Wrigley Field.

Since then, the power-hitting right-hander has built off that performance, ready to help be a piece of the puzzle for the success of Oklahoma State’s baseball team in 2018.

Vilade has a ton of experience already under his belt as he was part of Team USA’s Gold Medal-winning 18U Team last fall at the COPABE Pan American “AAA” Championships in Monterrey, Mexico that featured other top 2017 prospects and former Under Armour All-Americans, Hunter Greene, Royce Lewis and MJ Melendez.

After moving from Texas to Oklahoma last summer, Vilade is off to a white-hot start in his senior season at Stillwater High School in Stillwater, OK, just a short distance away from Oklahoma State University where Ryan will soon play.

Baseball Factory’s Matt Lund recently spoke with Vilade about the transition from Texas to Oklahoma, how he leads by example on the field, what he’s learned about the game of baseball from his father and his time as an Under Armour All-American.

Matt Lund: Your Dad joined the Cowboys coaching staff at Oklahoma State University as an assistant where you are currently committed to play collegiately. Because of that, the family moved from Texas to Stillwater, OK to be closer. You’re attending Stillwater High School and playing your senior season there, how has the transition gone so far?

Ryan Vilade: The transition has been going good. I came in to Stillwater and the baseball team treated me well and made me feel like family as soon as I got here. We all work hard and we have one goal in mind and that’s to win the state championship and from the beginning, it’s been that mentality. People here treat us well, we’re moved into our new house so that made it more comforting because at first we were in a small duplex, so getting moved in and baseball season started up, it’s beginning to feel more at home.

ML: Any difference in the level of talent between Texas and Oklahoma?

RV: I think what I’ve seen is pretty even. There are some great arms and bats in Oklahoma. I think the big difference is the style of baseball played here, the way they play the game overall. From a competitive standpoint, it’s pretty even.

ML: Your team traveled to Arizona for a tournament recently, you played very well (hitting over .400 with a double, triple and a homer) – how was the level of talent out there?

RV: The level of talent was great, big time arms and big time guys… it was fun going down there to compete with them. Beating some of the top teams from other states was fun, we got to go out and show what us Oklahoma guys can do. Competing against the best high schools out there and I think we can definitely be considered one of the best.

ML: You were part of a team that won the Gold Medal for USA in Monterrey, Mexico where you played 2nd base. Currently, you’re playing shortstop… Where do you feel most comfortable in the infield? Do you have any preference?

RV: I feel most comfortable at short, I’ve been playing there my whole life and can go onto the next level at SS, but I can play anywhere in the infield. I also played a little OF with Team USA towards the end of the trial games too.

ML: If there’s a chance you’re drafted high this year, you’d be ok with roving around the infield, playing wherever you can?

RV: Yes sir, wherever they need me, I’ll play.

ML: You won the HR Derby before last year’s All-America Game, which is an appropriate topic right now since you’re off to a huge start. Take me through your memories of winning the event at Wrigley Field and your time there with teammates… what was your biggest takeaway from everything?

RV: Playing at Wrigley is something I’ll never forget. That was my first time ever being at Wrigley… to play on it for the first time being there is pretty special. When I was in the HR Derby, that was awesome to end up winning it against some of the great guys participating in it with me. That’s something that not many guys get to do. Taking in all the memories we made together. Hanging out with all the guys, playing ping pong, PlayStation 4, rooming with them. It was great, they treated us really well over there.

ML: You’re seemingly scratching the surface with your easy power and the potential that is there- what are you looking to do at the plate that produces the power you’ve shown? Have you always had that kind of power?

RV: I think I’ve always had that power, but I think it was more of a doubles, triples, hitting the gaps and now it’s starting to turn into the home run power. I’m trying to see the ball well, get a good look at it, swing at strikes and be ready. Having hard contact and let the barrel do the rest of it.

ML: ….usually the power isn’t too far behind when you’re using the gaps, hitting doubles and triples…

RV: Yeah. I think staying small to the ball, and not get too big on the swings is the key to that happening.

ML: You have the reputation of being a high character, good makeup, good baseball IQ player – did that come from growing up around the game with your Dad?

RV: I was pretty much born on a baseball field… my Dad being a college coach and then onto the Rangers and now at OK State, I’ve always been on the field. He’s taught me that it’s about who you become along the way becoming the man you are, after you’re done playing the game of baseball, you should be a great guy and how people remember you is always important. They don’t want to remember you as the guy who threw his stuff when he got out, or always arguing calls. You want to be the guy that respects the game and show people watching that the game is being played the right way.

ML: If things work out that you’ll be on campus at Oklahoma State, you have some buddies that are freshman currently there – what will that be like to play with your those guys but also for your Dad as well?

RV: There are some great guys playing there currently that I know personally, and have played with a bunch of them while in Dallas. To play with them would be awesome and to potentially win a national championship would be great. To play with my Dad would be something cool, I’ve played for him before and know he’s one of the best coaches out there, so continuing to learn from him would be pretty cool.

ML: Being your Dad was a coach in the Rangers organization, were you ever around any of the younger guys who were looking to make an impact at the next level?

ML: Anything you learned from them when you would go out there and hit?

RV: Continue to work every day. Growing up, you see some of the best talent didn’t make it, because of how hard they worked.. then you see some of the guys who may not be as talented, but they worked extremely hard and make it. So what I learned from them is that, every day, you gotta get better some how, whether that’s studying film, or working on your swing, or doing defensive reps, somehow you have to get better.

ML: You were the youngest to play at our Futures Texas event as a freshman in late 2013 and there were some talented players in that event – Ke’Bryan Hayes and Blake Rutherford to name a few… what do you remember about that experience and your time with the Baseball Factory overall?

RV: I remember being down there for that in Texas, facing Tyler Ivey (who played at Texas A&M before transferring this year to Grayson College)… and that was pretty cool to face some of the other top arms in Texas. Baseball Factory has treated me so well. It’s a great way to be seen for scouts and coaches and getting the chance to play at Wrigley. They take care of their guys and do it the right way and its been a great experience.