The Under Armour Baseball Factory National Tryout Tour makes a stop in Indianapolis on Sunday, September 6th at Decatur Central High School, home of the Hawks.

Today, we’ll take a closer look at two recent Baseball Factory players who have come to a tryout in the state of Indianapolis and have gone on to play baseball collegiately.

The 5’10”, 190 pound outfielder was a 2014 All-Region Central Team selection as a senior, and as a junior, was an honorable mention all-state and HCC All-Conference selection. He batted .371 with nine RBI and 26 runs scored as a senior.

Gantt participated in an Under Armour Baseball Factory National Tryout in Indianapolis back in March of 2013. He is now a member of the Ohio State University Baseball team and as a freshman for the Buckeyes, played very well while in the starting lineup. 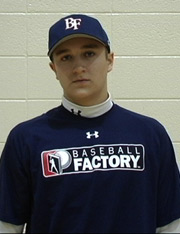 Austin Jones – Jones is a 2014 grad from Brownsburg High School in Brownsburg and was a two-year letterman for the Bulldogs. He began his Baseball Factory experience first attending a National Tryout in Indy back in October 2009 and then in Plainfield, Indiana in September 2010 and March of 2011.

Jones made continued progress during that time period, improving his running time by almost two tenths of a second and seeing an uptick in his hitting and power between late 2009 and 2011.

In July of 2011, Jones was selected to participate in the Cape Cod Pro Select Training where he showed even more offensive and defensive improvements.

In March 2012, Jones took part in the Under Armour Baseball Factory College PREP Program (previously the Premium Video Program) and defensively, showed good body control and accuracy with his throws. Offensively, he showed good stride and balance and swung the bat with good rhythm, using his lower half well.

After graduation, Jones went on to play at Anderson University – a liberal arts university in Anderson, Indiana – where last season as a freshman, Jones saw action in only one game, however he scored a run in that appearance for the Ravens. Jones figures to have an even bigger role for Anderson in 2016 as a sophomore.

The Under Armour Baseball Factory National Tryout Tour will be rolling into a town near you soon! Visit our tryout page to register and receive more information.