Lefty Jake Eder took the ball for the National Team in the top of the seventh with a 5-4 lead. Troye walked on five pitches to start off the inning for the American Team.

Eder then struck out both Waters and Baz looking. After Troye advanced to third of a wild pitch, Holmes lined out to second base to end the inning.

Before the bottom of the seventh, game was shortly delayed.

De La Torre led off the bottom of the seventh with a walk and stole second on the first pitch on base. Hunter Ruth then struck out Hagen Danner. Adell then singled to left field, but De La Torre got thrown out at home plate to keep the score at 5-4. Ruth then got Adam Hall to ground out to third.

The game was delayed again after the completion of the seventh inning due to lightning.

Ben Jordan started the top of the fourth for the National Team, as one of the tallest pitchers at the game at 6’9”.

Ramirez led off the inning for the American Team with an infield single, despite a big league effort from second baseman De La Torre. Ramirez advanced to second on a wild pitch then stole third as Lewis struck out looking for the first out of the inning.

Greene then smoked a line drive right to the first baseman, and Papantonis struck out, leaving Ramirez stranded at third base.

Alex Scherff started the bottom of the fourth for the American Team. After hitting Pratto to start the inning, Vilade grounded out to second. Ramos then singled to center for his third RBI of the game to put the National Team ahead 3-2. Brannen then tripled to left field to score Ramos to increase the lead to 4-2.

.@Ramos2136H singled up the middle to score @n_pratto@cbrannen5 tripled to deep LF to score Ramos. National up 4-2 b4 #UAALLAMERICA

After hitting Allen with the next pitch, Scherff got Adell to line into a 5-3 double play, as Allen was stealing second base. Despite giving up two runs in his inning, Scherff did show impressive stuff.

Back to back 96 mph heaters from @alexscherff23 to get ahead 0-2. Touched 97 a few times #UAALLAMERICA pic.twitter.com/30juGrKNku

Jack Conlon then took the mound in the top of the fifth for the National squad with a 4-2 lead. Starting in the fifth, both teams began using their bench players. Garrett Mitchell led off the inning with a single up the middle and stole second base on the next pitch. Christopher Troye then struck out swinging for the first out of the inning.

Mitchell then got caught stealing for the second out of the inning. Drew Waters then drew a four-pitch walk, stole second and stole third, which led to an errant throw into left field, making the score 4-3.

Alex Toral walked on that pitch and then stole second base for the American Team’s fourth stolen base of the inning. Ben McConnell then struck out swinging to end the inning.

Joe Boyle threw a scoreless bottom of the fifth for the American Team. He induced a flyout to Adam Hall to start the inning.

Boyle then blew a fastball by Mason Doolittle and got Uselton to ground out softly to second base for the three-up, three-down inning.

Mitchell Stone took the ball in the top of the sixth for the National Team, and Stone is the only player taller than Jordan, as the southpaw is 6’10”. Stone got Ramirez to ground out to start the inning.

Lewis then hit a solo home run to left field to tie the game at 4-4.

No doubter HR to left off railing at top of bleachers from @kobejazzlewis to tie game at 4-4 in top 6th. Off 91 mph FB #UAALLAMERICA

Stone then got Greene to ground out to shortstop and Papantonis to strike out, but Papantonis reach first on a passed ball. He then advanced to second on a wild pitch. Mitchell hit a shot to center field, but Jo Jo Gray stole an extra base hit from him.

With the score tied 4-4, Jacob Heatherly got Pratto to ground out to start the bottom of the sixth. The southpaw then got Vilade to strike out.

Ramos then hit a home run for this third hit of the game and his fourth RBI of the day to put the National Team up 5-4.

Heatherly then got Brannen to strike out looking to end the sixth inning.

The score at the end of six inning is 5-4, with the National Team winning.

The 2016 Under Armour All-America Game is underway here at Wrigley Field. The National Team is the home team against the American Team. Here are the starting lineups for both teams: 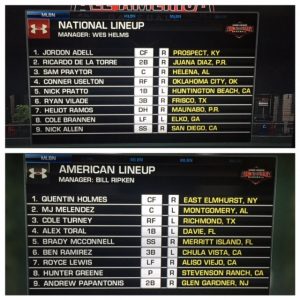 Hans Crouse started the game off with a 93-mph heater to Quentin Holmes, eventually striking him out swinging on a 94-mph heater.

That was 94 from @hansrouse to retire first hitter faced on K. Up to 95 so far. #UAALLAMERICApic.twitter.com/MWzgHn0y7v

The American Team scored a run off Crouse in the top of the first inning. Cole Turney followed up MJ Melendez’s walk with an RBI double.

Sharp 2B to LCF from @coleturney14 to score @mjmelendez7 who reached on BB. 1-0 American top 1.

Alex Toral followed the double up with a walk. Crouse got out of trouble in the first, inducing a flyout to Brady McConnell and a groundout to Ben Ramirez.

Hunter Greene started the game on the bump for the American Team with a 1-0 lead.

The 6’4” righty induced a pop up to Jordon Adell to record the first out. Ricardo De La Torre then singled up the middle, but Sam Praytor grounded into a 6-4-3 double play to end the inning. 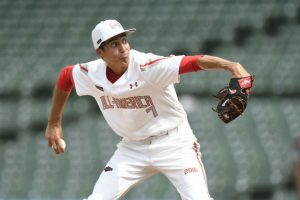 Hans Crouse settled down in the top of the second, going three-up, three-down with some help from his defense, retiring Royce Lewis, Hunter Greene and Andrew Papantonis.

.@hansrouse settles down for 1-2-3 2nd inning. Nice slow roller play at 3B by @RyanVilade to retire Greene. #UAALLAMERICA 1-0 American mid 2

Left-handed pitcher DL Hall showed right away why he is one of the best high school players in the country, striking out Conner Uselton on this filthy sequence:

That’s 93 on inside black from @dlhall33 . Backed off on 76 CB nicely earlier in AB, and touched 94 #UAALLAMERICApic.twitter.com/xZaqSaZSWY

The National Team then got going when Nick Pratto got hit by a pitch with one out in the bottom of the second. Pratto then stole second, and Home Run Derby Champion Ryan Vilade then drew a seven-pitch walk.

Tanner Burns then took the mound for the National Team in the top of the third inning. Holmes led off the inning with a walk, and then the speedy outfielder stole second base.

Melendez then flew out to deep center to get Holmes to third base with only one out.

Following a Turney walk, Alex Toral tied the game up for the American Team with a deep flyball to left field.

.@AlexT_20 smoked a sac fly deep to LF against the ivy to score @jonezz_quentin and tie score at 2 mid 3rd #UAALLAMERICA

After a walk to McConnell, Burns picked Turney off second base to escape the trouble.

Shane Baz then took the mound for the American Team, getting De La Torre to groundout on his first pitch of the inning. Baz then struck out Praytor and got Uselton to fly out to left field, going three-up, three-down.

That’s a filthy 84 mph slider from @thewizardofbaz followed by a 92 mph FB. Touched 93 so far #UAALLAMERICApic.twitter.com/NNgM0f9HDv

At the end of three innings, the score is tied 2-2.