Before the Under Armour All-America Game, eight players participated in the Eastbay Home Run Derby. Each player got two minutes to hit as many home runs as they could. Four players were chosen from the National Team and four were chosen from the American Team. The player who hit the most home runs for each team moved onto the finals to compete for the crown.

Over @UnderArmour banner in deep LCF to get @Conner1Uselton on board at @Eastbay HR derby. Then off @BaseballFactory banner #UAALLAMERICA

.@jordonadell off railing and onto Waveland early in @Eastbay derby. Over Eastbay banner on top of 368′ mark in LCF #UAALLAMERICA 7 HR

.@RyanVilade nearly onto Waveland Ave, off top row of bleachers to LF side of scoreboard. 7 in 1st round of @Eastbay HR derby #UAALLAMERICA

Oppo taco for first HR of @Eastbay derby for @coleturney14. Over @UnderArmour banner in RF next. 2 total

First round of @Eastbay HR Derby for @GarretMitchell5:
3 HR, including shots of 2 different Eastbay signs beyond RF

Top of bleachers just under LCF scoreboard for @HunterGreene17, then off top railing more to LFL, and again more to gap. #UAALLAMERICA 8 HR

Hunter Greene advanced for the American Team, while Jordon Adell and Ryan Vilade took part in a swing off to advance. Both Adell and Vilade hit two home runs in the swing off (five swings total), and both players advanced in a three-player final. Each player got two minutes in the final round, as well.

Unofficial longest HR:@jordonadell hit his own image about halfway up the scoreboard in LCF. Yikes #UAALLAMERICA 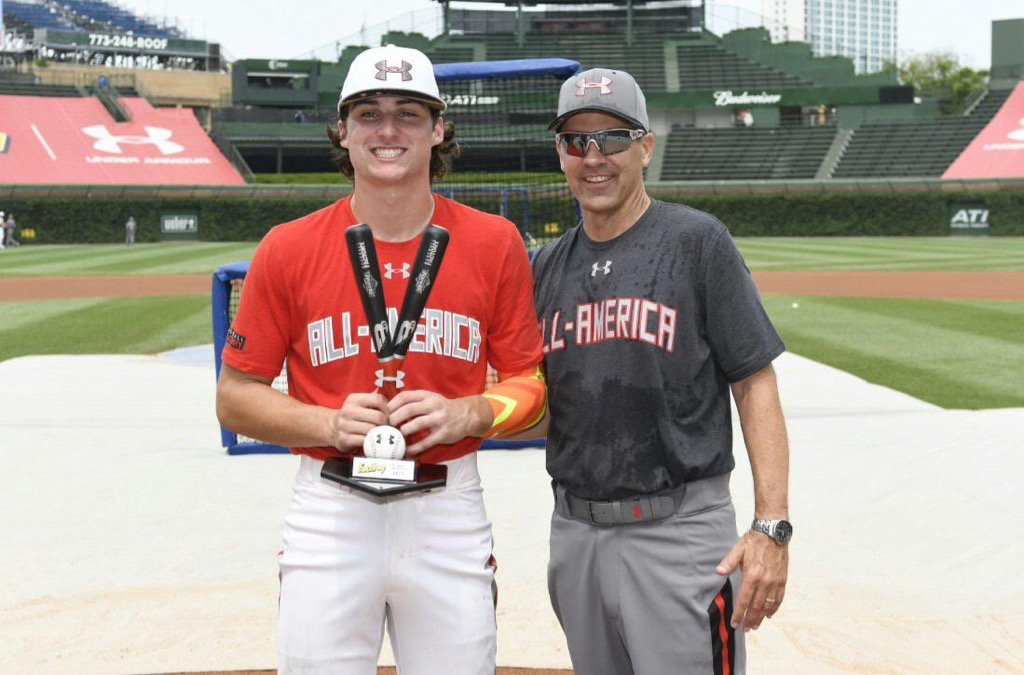