May 10 Dom Pasquale NewsShare This Article

Before these two young stars battled it out in the AL East, they would both attend Baseball Factory events and played PONY Baseball.

As a young ball player, Andrew Benintendi played PONY baseball for the SW Ohio League. He would then be selected 7th overall by the Boston Red Sox in the 2015 MLB Draft, and would make his Major League debut just 421 days later on August 2, 2016. Three years prior to him being drafted in 2012, Benintendi attended an Under Armour Baseball Factory National Tryout in Amelia (Cincinnati), Ohio in June of 2012.

During his senior year in high school at Madeira in Cincinnati, Benintendi stole thirty-eight bases, hit twelve home runs, and had fifty-seven RBIs, while hitting an astounding .564. Those efforts were good enough to win him the Ohio Gatorade Player of the Year.

As a true freshman at the University of Arkansas, Benintendi slashed .276/.368/.333 with one homer and twenty-seven RBIs. In his sophomore season in Fayetteville, he would see a major improvement, and one that made him one of the top prospects for the MLB Draft. Benintendi would hit .380 and become the first Division I player in seven years and the first SEC player in nine years to blast 20 home runs and steal 20 bases. He finished with a .489 OBP and a .715 SLG, which would be good enough to lead all of the SEC in those categories, in addition to the aforementioned home run total and average.

Following his incredible sophomore season, Benintendi was named SEC Player of the Year, and would go onto win the Baseball America College Player of the Year, the Dick Howser Trophy, and the Golden Spikes Award. Other notable players to win the Golden Spikes award are: Factory alums Kris Bryant and Bryce Harper, Stephen Strasburg, and Buster Posey. 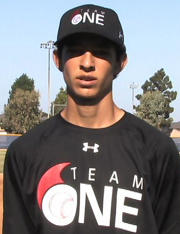 Benintendi quickly worked his way through the Red Sox minor league system, playing in just 151 minor league games, hitting a combined .312 between Class-A and Double-A before being called up from Portland to make his major league debut on August 2, 2016. He made an immediate impact in 34 games that season, hitting .295 and broke out in a big way last season, finishing second in AL Rookie of the Year voting to the Yankees, Aaron Judge. He played in 151 games, batting .271 with 26 doubles, 20 homers, 90 RBI, 20 stolen bases and 70 walks.

The native of La Palma, California, Jake Faria played Whittier PONY Baseball there. One year before being drafted, in 2010, Faria attended an Under Armour Baseball Factory College PREP event in Costa Mesa, CA in July of 2010.

After committing to play college baseball for Cal State Fullerton, Jake Faria was selected in the 10th round of the 2011 MLB Draft by the Tampa Bay Rays out of Gahr HS in CA. Faria would go on to pursue his professional career and would make his professional baseball debut with the Gulf Coast Rays (Rookie affiliate). Between 2011 and 2017, Faria would go 41-32 with an ERA of 3.13 and 626 strikeouts in 599 IP.

He would play five more seasons in the Rays organization before being promoted to Triple-A in the middle of the 2016 season. Upon entering the 2017 season, Baseball America named him as the 8th best prospect in the Tampa Bay farm system. That same year, and around the same time he got promoted to Triple-A, Jake Faria would make his Major League Debut on June 7th, 2017 against the Chicago White Sox. He would throw 6 1/3 innings of 3 hit, one-run baseball while capturing his first MLB win.

Faria to this point has made seven starts with a record of 3-1 and an ERA of 4.15 with 30 strikeouts in 34 1/3 innings. While he does not have over powering stuff, he mixes his pitches well and gets outs when he needs to.