In the midst of winter, its hard not to get excited looking ahead to the summer and playing baseball in front of a big-time crowd in a big-time park. 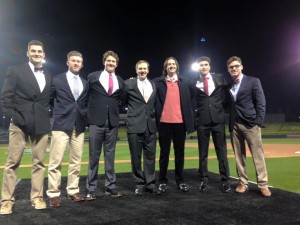 Steve Bernhardt with the six All-Americans in attendance last night.

The Under Armour All-America Game is the signature showcase event for the top 40 high school players in the country as well as internationally and is heading into its ninth season of existence.

Set against the backdrop of venerable Wrigley Field in Chicago, the All-America Game will take place on Saturday July 23rd , 2016 as the game caps off a four-day all-encompassing baseball experience staffed by some of the game’s very best players and coaches.

Here are the first 10 players to be selected as Under Armour All-Americans.

For more information on this year’s Under Armour All-America Game, please visit, http://www.baseballfactory.com/AllAmerica