Grae Kessinger started at 2B for the visiting American team in the 2015 Under Armour All-America Game, and moved over to play SS in the middle innings. 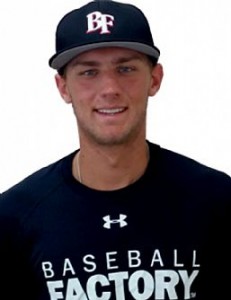 PREVIOUS SCOUTING REPORTS:
On a day where our on-field staff made the most of a bad weather situation, we were able to get good looks at players via a combination of indoor turf area and what was available of the outside space. We saw two players this day that would eventually be selected for the 2015 Under Armour All-America Game, one of which was Grae Kessinger. His scouting report appears below:

2016 SS Grae Kessinger (Oxford HS – Oxford, MS) is the grandson of former Major Leaguer Don Kessinger, who spent the bulk of his 16-year career with the Chicago Cubs. His father Kevin Kessinger played at Ole Miss, where Grae has committed to play at the conclusion of his high school career.

He stands a long and slender 6-foot-2 and 180 pounds, and featured fluid and easy defensive actions along with an advanced right-handed stroke. His measurables were also impressive — he reached 89 mph raw velocity, posted 89 mph bat exit velocity, ran a respectable 7.06 in the 60 yard dash.