Thomas Dilllard and Grae Kessinger — both Ole Miss commits — showed standout tools at the Under Armour Baseball Factory National Tryout in West Tennessee on Sunday, April 26. The weather forced much of the workout indoors at Houston High School in Germantown, but that didn’t appear to hamper the players very much. 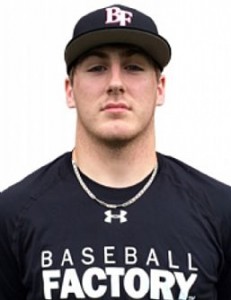 It is quite rare to find a catcher capable of posting a 1.81 pop time, and perhaps even more rare to find a switch-hitter capable of upper 90s bat exit velocity from both sides of the plate. 2016 C Thomas Dillard (Briarcrest Christian HS – Cordova, TN – Ole Miss commit) is both of those, making for an almost unheard of combination of measurables.

As if that weren’t enough, the 6-foot 210 pound Dillard ran 6.87 in the 60 yard dash and notched the first grip strength over 160 psi that I’ve seen so far this year. His right hand strength was 161 psi, while his left hand measured 156 psi — when I compile the data to rank this measurable, I’d be shocked if he didn’t sit by himself at the top.

Based on his performance in Germantown, Dillard was selected to participate in the 2015 Under Armour All-America Game, scheduled for August 15 at Wrigley Field in Chicago. 2016 SS Grae Kessinger (Oxford HS – Oxford, MS) is the grandson of former Major Leaguer Don Kessinger, who spent the bulk of his 16-year career with the Chicago Cubs. His father Kevin Kessinger played at Ole Miss, where Grae has committed to play at the conclusion of his high school career.

He stands a long and slender 6-foot-2 and 180 pounds, and featured fluid and easy defensive actions along with an advanced right-handed stroke. His measurables were also impressive — he reached 89 mph raw velocity, posted 89 mph bat exit velocity, ran a respectable 7.06 in the 60 yard dash.