At the 2015 Under Armour All-America Game, Thomas Dillard showed an impressive ability to impact the ball (again) from both sides of the plate. He drove several balls out of the ballpark on Thursday at UIC during the HR derby qualification round, offering proof that with a flatter move through the zone he can create backspin and carry from the left side of the plate. 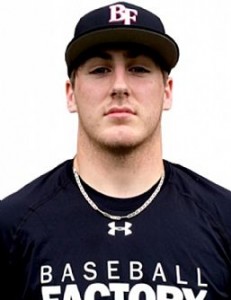 PREVIOUS SCOUTING REPORTS:
On a day where our on-field staff made the most of a bad weather situation, we were able to get good looks at players via a combination of indoor turf area and what was available of the outside space. We saw two players this day that would eventually be selected for the 2015 Under Armour All-America Game, one of which was Thomas Dillard. His scouting report from that day appears below:

It is quite rare to find a catcher capable of posting a 1.81 pop time, and perhaps even more rare to find a switch-hitter capable of upper 90s bat exit velocity from both sides of the plate (98 mph left-handed, 97 mph right-handed). 2016 C Thomas Dillard (Briarcrest Christian HS – Cordova, TN – Ole Miss commit) is both of those, making for an almost unheard of combination of measurables.

As if that weren’t enough, the 6-foot 210 pound Dillard ran 6.87 in the 60 yard dash and notched the first grip strength over 160 psi that I’ve seen so far this year. His right hand strength was 161 psi, while his left hand measured 156 psi — when I compile the data to rank this measurable, I’d be shocked if he didn’t sit by himself at the top.

Based on his performance in Germantown, Dillard was selected to participate in the 2015 Under Armour All-America Game, scheduled for August 15 at Wrigley Field in Chicago.