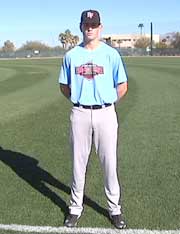 One of the high schoolers, Trent Alley, is a Baseball Factory alumnus and has attended three Baseball Factory events. Alley smacked two home runs in his only round of competition at the Triple-A Home Run Derby.

Alley recently graduated from Charlotte Country Day School and will attend Furman University and play baseball in the fall.

Here’s the video of Alley from the 2014 UA Preseason All-America Tournament: