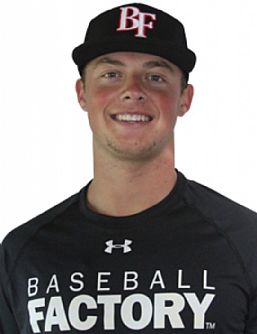 At 6’3”, 215 pounds, Caleb Sloan is an intimidating presence on the mound. He backs up the look with ability, throwing a heavy fastball from 90-94 mph with downhill plane. He’s aggressive with that pitch, going right after hitters and showing good command of it. Caleb complements his lively fastball with a quality slider that has sharp 10-4 shape, and is extremely difficult on right-handed hitters. He rounds out his arsenal with an effective changeup that comes out like his fastball.

Caleb’s athletic delivery is repeatable and his arm accelerates well through release. He is directional which helps contribute to his ability to throw strikes with all three of his pitches.

A competitor on the mound, Caleb is a stand-out on the football field as well.

While he has given up the quarterback position to allow his arm to exclusively throw baseballs, he still plays on the defensive side of the ball. As a DE/OLB, Caleb led his team with 10 sacks and certainly has the toughness you would expect from that kind of two-sport athlete. His arm is fresh and his ceiling is high.