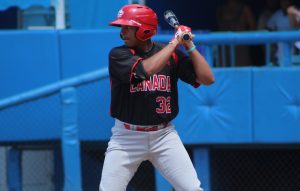 Noah Naylor continues the tradition of talented players from Canada being selected to participate in the Under Armour All-America Game. He follows prospects like Gareth Morgan, Demi Orimoloye, Andrew Yerzy, Kelin Deglan and his older brother, and former 1st round pick Josh Naylor.

Noah is a left-handed hitting catcher with one of the best pure swings in the entire 2018 class. He has rhythm, feel for the barrel and the ability to drive the ball to either gap. He is balanced throughout, sees the ball well and looks to do damage with his selectively aggressive approach.

Noah spent last year hitting fourth for the Canadian Junior National Team, right behind 2016 Under Armour All-American Adam Hall, and he has already proven that he can hit quality pitching.

As a defender, he is solid behind the plate with good hands and quick release. While the profile of a left-handed hitting catcher is the most appealing, Noah is versatile enough to play either corner infield spot as well.

Overall, Noah has challenged himself against good competition as often as anyone in the 2018 class, and he continues to prove that he can handle it. He is fun to watch hit, and we look forward to his sweet swing that will be on display at Wrigley Field this summer.